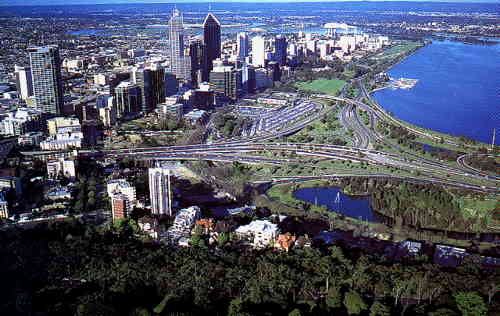 Airview of the Center of Perth 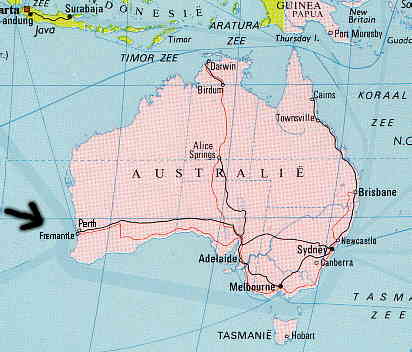 Map of Australia, Perth and Fremantle in the lower left corner


In 97 Corrine and I have been to Western Australia.
I booked a motel for the first night and a car for 4 weeks and we flew to Perth, Western Australia.
We planned to drive around in WA the whole month and then return to Perth to fly back to Holland.
We liked Perth so much we didn't drive very much, We found old friends from Corrine through the Phone book
and they invited us to stay at their house as long as we stayed in Perth.
Thanks to them our perfect holiday even became better and we had a very good time there.
They have a very nice house with lots of space, and a big garden with a garage.
In Australia nobody has lack of space, almost every house has a big garden around it with a garage
and the prices of the houses are very low as you can see in the Homebuyer.
We made trips to Rottnest Island, 16 kilometers off the coast of Perth, to Wave Rock, the Pinnacles
all within a range of 350 km from Perth. 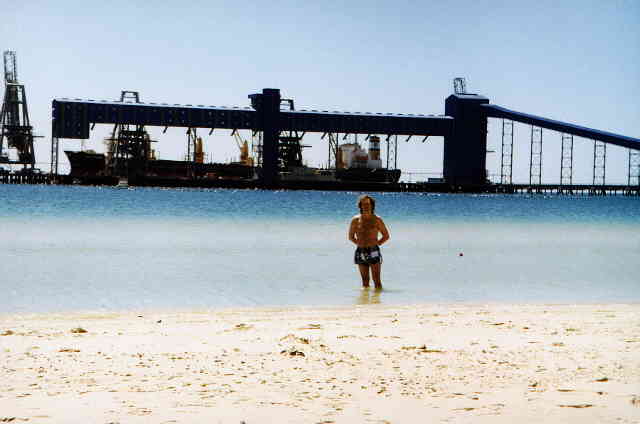 The Grain jetty near Kwinana beach close to Rockingham, south of Perth. 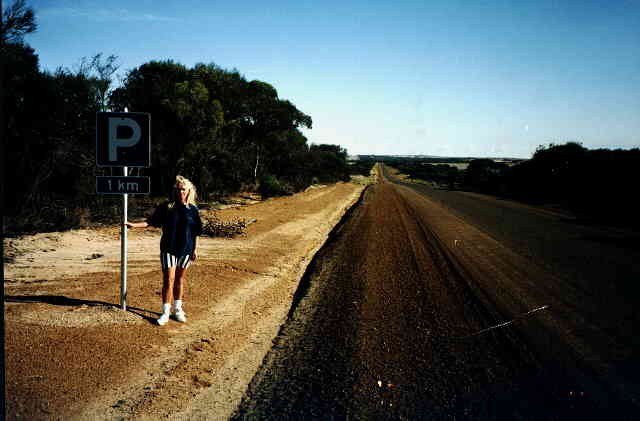 This is the long road to Wave Rock.
I wonder why we need a parking place here in the middle of nowhere.

On top of Wave Rock, with a perfect view over the beautiful landscape. 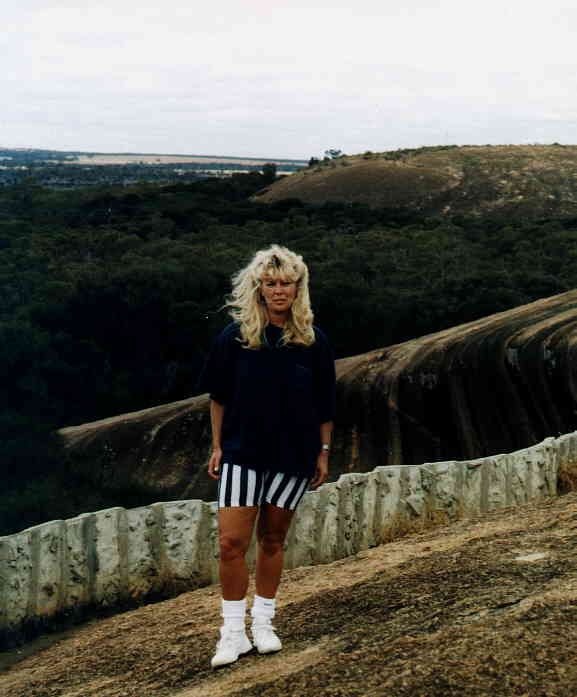 Corrine didn't go too close to the edge.

Under Wave Rock, we left the baby on the right side at Wave Rock.

View over the ocean from Hillarys Yacht harbour in the direction of Fremantle (south).

Looking to the right side: A beautiful beach of Rottnest Island.

Looking to the left side: the reefs where we have been all day.
A lot of Fish and Lobsters to see there. 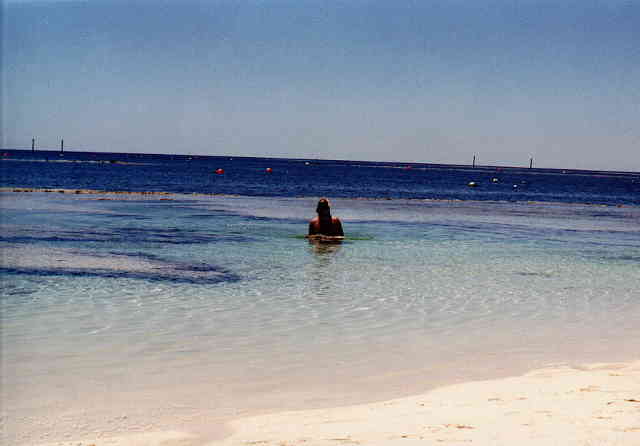 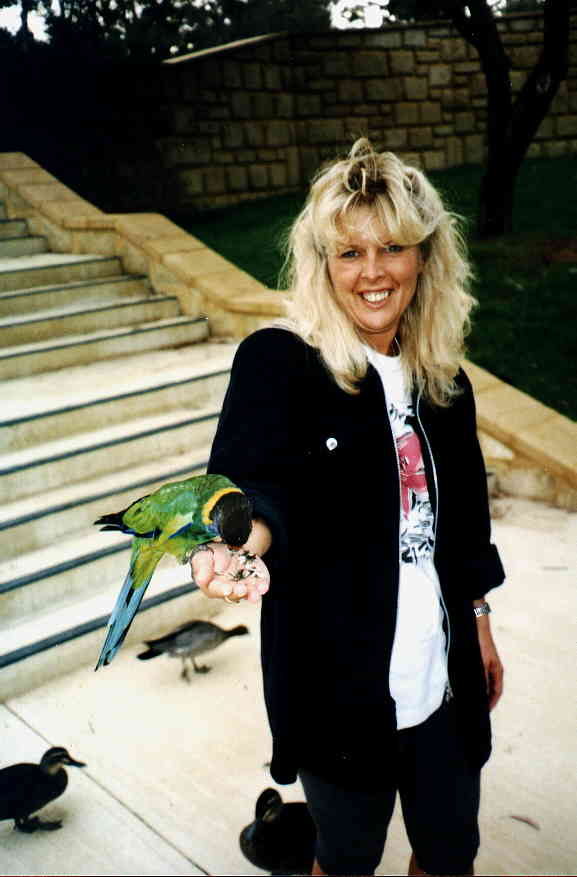 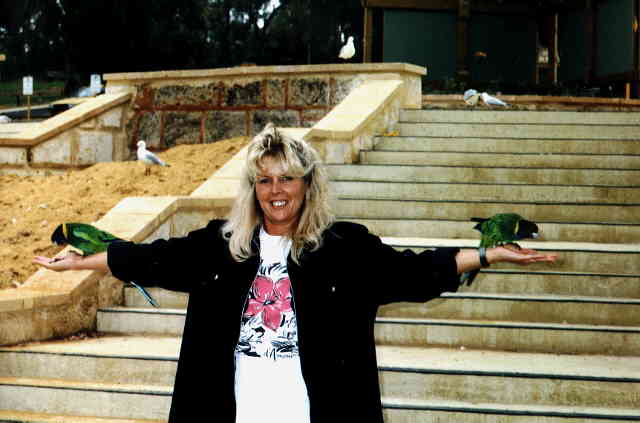 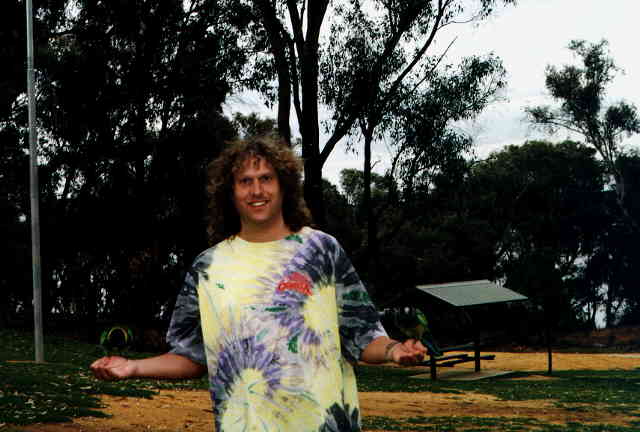 The birds probably thought I was a big full coloured parrot. 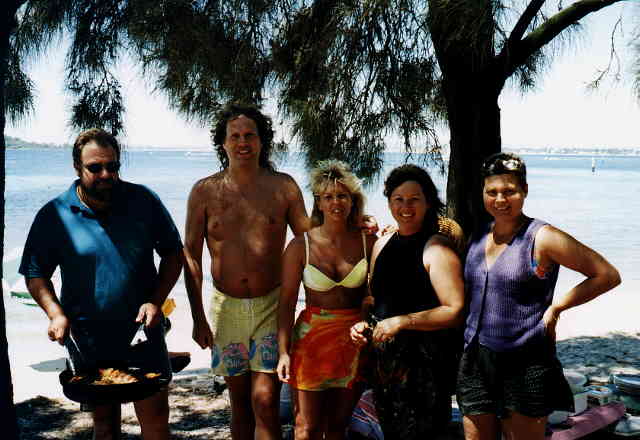 Barbeque with our friends at the Swan river near Perth, Aussies like to barbeque a lot,
I think my ancestors must have been Aussies too.

The Australian male view of life!!

On the Second Day God created water - for surfing, swimming and barbies
on the beach.
God saw that it was good.
Evening came and morning came and it was the Third Day.

On the Third Day God created the Earth to bring forth plants - to
provide tobacco, malt and yeast for beer and wood for barbies.
God saw that it was good.
Evening came and morning came and it was the Fourth Day

On the Fourth Day God created animals and crustaceans for chops,
sausages, steak and prawns for barbies.
God saw that it was good.
Evening came and morning came and it was the Fifth Day.

On the Fifth day God created a bloke - to go to the footy, enjoy the
beach, drink the beer and eat the meat and prawns at barbies.
God saw that it was good.
Evening came and morning came and it was the Sixth Day.

On the Sixth Day God saw that this bloke was lonely and needed someone
to go to the footy, surf ,drink beer, eat and stand around the barbie with.
So God created Mates, and God saw that they were good blokes.
Evening came and morning came and it was the Seventh Day.

On the Seventh Day God saw that the blokes were tired and needed a rest.
So God created Sheilas - to clean the house, bear children, wash, cook
and clean the barbie.
Evening came and it was the end of the Seventh day.

God sighed, looked around at the twinkling barbie fires, heard the hiss
of opening beer cans and the raucous laughter of all the Blokes and
Sheilas, smelled the aroma of grilled chops and sizzling prawns, and God
saw that it was good, better than that, it was bloody good. 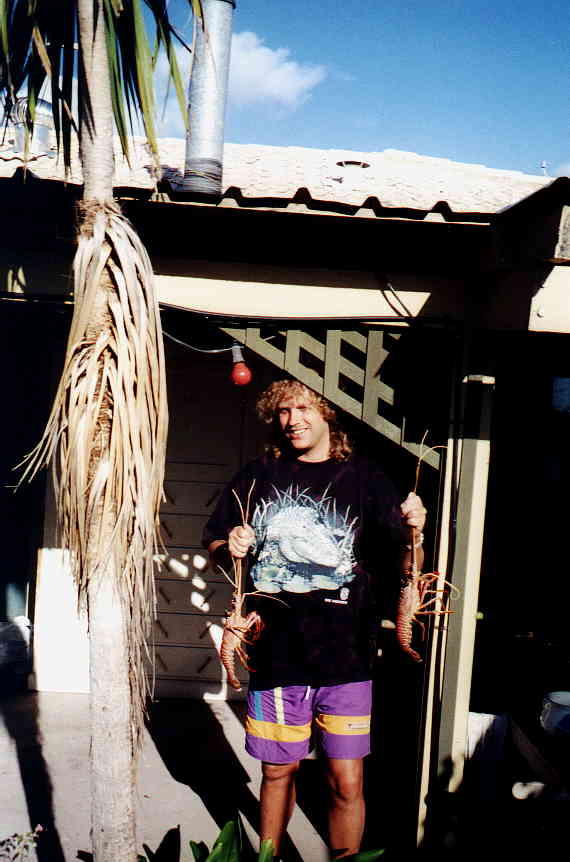 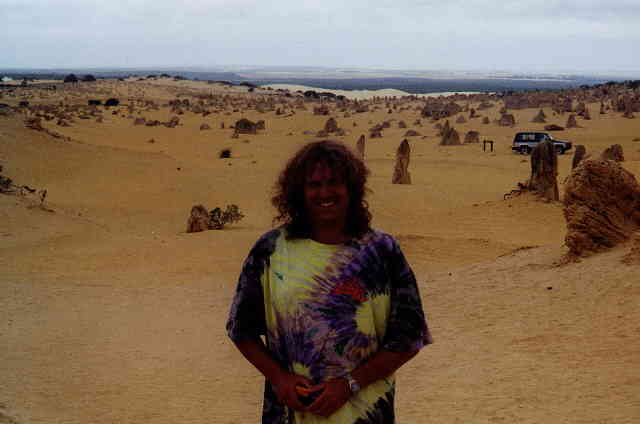 At the Pinnacles, I start to look like an Aboriginal, i mean my color. 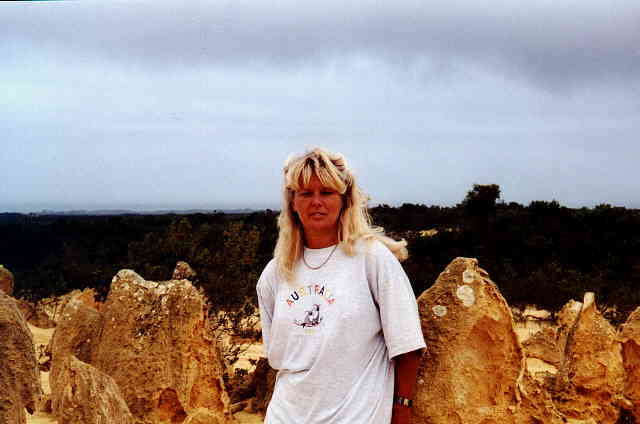 At the Pinnacles Corrine also got a good hide tan, try to find her left arm. 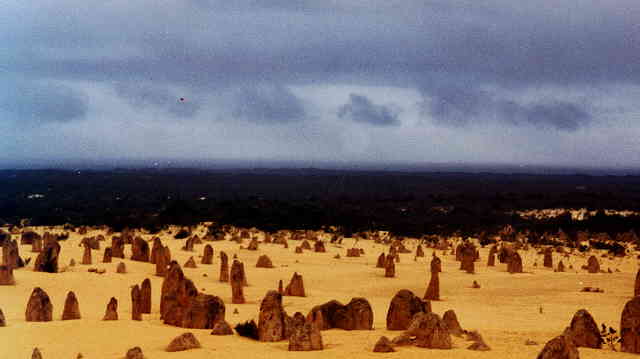 See some live Webcams in Perth and Fremantle.

back to willem's homepage